Perry County Council of the Arts features several exhibitions throughout the year highlighting the works of one particular artist or theme. The public is invited to attend a special opening reception to mark the start of each exhibition.

Please note: We are not hosting exhibition receptions until further notice.

Original artwork in a variety of media is on display virtually during PCCA’s 6th Annual Juried Exhibition, with an opportunity to view the show at the Veterans Memorial Building. Cast your vote for your favorite piece of art to win the People’s Choice Award ~ in person or on our Facebook page!

The Veterans Memorial Building is open to the public Monday – Friday, 8 a.m. to 4 p.m.

“The Red Cane was inspired by an old Gentleman I knew some 20 years ago. I had taken a small a black and white photo of him, and forgot about it until I was going through some stuff while clearing out junk while quarantined, and I realized he needed to be painted. The painting took very little time, as he just came to life.” 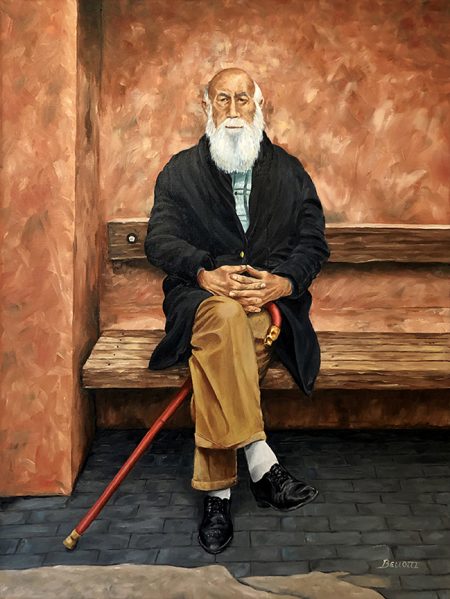 Much of the featured artwork is available for purchase in our online gallery. Show your walls and independent artists some love this holiday season!

On and Off the Grid

In this colorful, geometric abstract exhibition, Thom Kulp explores the grid format as a viable means of artistic expression and a metaphor for the restrictions that people have faced during the covid-19 pandemic. While inspired by the grid work of artist Agnes Martin, Thom was also compelled to develop ideas which were not as strict in precise shape and style.

Like many artists, Thom Kulp has always engaged in some sort of creative endeavor. His journey began with crayons and pencils as a child and progressed to watercolors, oils, and acrylics later in life. Along the way, Thom has explored collage, collagraphy, encaustic, block printing, and mandala drawing. Some of his latest pieces venture into the 3-dimensional realm, but have not, yet, become true sculptures. They are more akin to bas-reliefs.

Thom studied painting and drawing at Harrisburg Area Community College with colorist painter Edith Socolow, who influenced him in the realm of abstract art. Color as subject matter became a revelation to him, and his current work is still highly influenced by this. After studying Experimental Mixed Media with Linda McCloskey for several years at the Art Association of Harrisburg (AAH), he took over that class and taught it for several years at AAH, as well as at the York Art Association in York, Pa.

In addition to studying with Linda, Thom has taken classes with Julie Yontz-Rupp, Phyllis Disher-Fredericks and Ron Schloyer. He has conducted various workshops in experimental mixed media, collagraph printing, mandala making, and painting in the style of Jackson Pollock. Currently, he teaches students in his home studio in Linglestown, Pa. Thom has participated in many local shows and won numerous awards for his art.

Makeover your home or grab unique gifts like locally made home decor, artwork and functional pieces that are perfect for Spring decorating and gift giving.

Enjoy local art at these locations on an ongoing basis

Exhibition promotion is made possible in part by a generous sponsorship from PPL.

May 1-29 at the PA State Capitol Building, East Wing Rotunda

Artwork created by PCCA members will be on display and for sale in a special Art on Tour exhibition in the East Wing Rotunda of the Pennsylvania State Capitol Building, which is open to the public Monday-Friday, 7 a.m. to 6 p.m.

This exhibition will feature artwork in a variety of media, created by Perry County Council of the Arts (PCCA) rostered teaching artists, who provide creative classroom instruction in 10- to 20-day residencies in seven counties through PCCA’s Arts in Education partnership with Pennsylvania Council on the Arts.

PCCA hosts Director’s Choice, a selection of noteworthy student artwork from Youth Art Day 2020. Most of the artwork will be for sale. Please consider supporting our talented youth by purchasing their works of art.

Explore an exhibition of artwork created in the Arc of Cumberland & Perry Counties’ (CPARC) and Perry County Council of the Arts’ (PCCA) 6-week inclusive art classes for all ages and abilities, led by Tom Oakes. Select pieces from the classes will be highlighted in this exhibition open to the community.